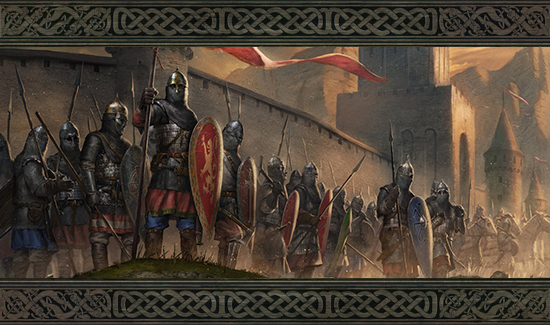 As minor nobles, they own land, enough to keep themselves and their family with loyal servants and the various steeds that is required for them to contribute to their liege in time of war and peace. Trudvang being inspired by Norse and Celtic myths will see this campaign introduce one of the greatest Celtic myths of all time in the form of the adapted version of the various Arthurian tales. It will be a game set in the unequal and for us today very alien world of medieval fuedalism. Both a brutal reality and the core of the romanced chivalric idealism.

Every player character is a knight, thus having both the privileges of elite society and also the risky, often deadly responsibilities. These dichotomies — brutal reality versus idealism, elite privilege versus deadly burden — are the basis for the game. A Song of Spears is a game of knights. It is not about the magicians, the thieves, or the scholars. In this homebrew game that mixes both the rules of King Arthur Pendragon with the world of Trudvang, designed for playing the heavily armed and armored chevaliers of the adapted Arthurian literature, knighthood will be complex enough!

Welcome, to the lands of knight and ladies.

A Song of Spears Comments

I'm sorry, but we no longer support this web browser. Please upgrade your browser or install Chrome or Firefox to enjoy the full functionality of this site.